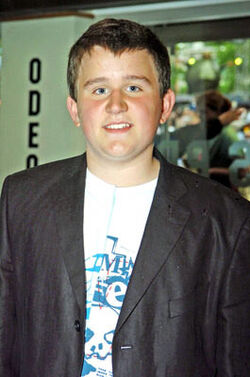 Harry Edward Melling (born on 13 March 1989) is an English actor. He plays Dudley Dursley in the Harry Potter films and serie. He attended Hendon School and then Mill Hill School. He is the grandson of Patrick Troughton, who starred as the Second Doctor in the science fiction series Doctor Who from 1966 to 1969. He is also the nephew of actors David Troughton and Michael Troughton and the first cousin of cricketer Jim Troughton and actor Sam Troughton. He is a member of the National Youth Theatre. He trained at the Sue Nieto Theatre School in North-West London and is currently attending the London Academy of Music and Dramatic Art.

Harry Melling is the actor that portrays Dudley Dursley Harry Potter's spoiled cousin in seven seasons of the serie additions of the Harry Potter book series.

Retrieved from "https://hpseries.fandom.com/wiki/Harry_Melling?oldid=4110"
Community content is available under CC-BY-SA unless otherwise noted.