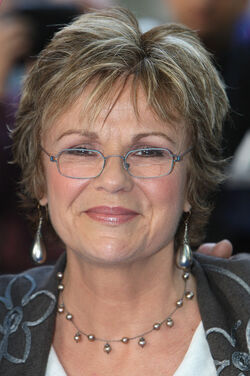 For decades Brit actress and comedienne Julie Walters has served as a sturdy representation of the working class with her passionate, earthy portrayals on England's stage, screen and TV. A bona fide talent, her infectious spirit and self-deprecating sense of humor eventually captured the hearts of international audiences. The small and slender actress with the prominent cheekbones has yet to give an uninteresting performance.

Walters also played Molly Weasley in all the Harry Potter films, but Harry Potter and the Order of the Phoenix (2007).

Retrieved from "https://hpseries.fandom.com/wiki/Julie_Walters?oldid=4113"
Community content is available under CC-BY-SA unless otherwise noted.