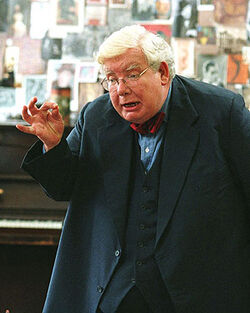 Richard Griffiths plays Vernon Dursley in the Harry Potter series and appeared in every season. Through the series he had come to work with British actors such as Fiona Shaw, Michael Gambon and Mark Williams.

Retrieved from "https://hpseries.fandom.com/wiki/Richard_Griffiths?oldid=4112"
Community content is available under CC-BY-SA unless otherwise noted.