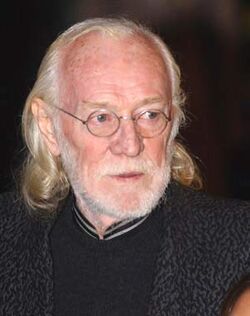 Richard St. John Harris (1 October 1930 – 25 October 2002) was a two-time Academy Award-nominated and Grammy Award-winning Irish actor, singer-songwriter, theatrical producer, film director and writer. He appeared on stage and in many films, and is perhaps best known for his roles as King Arthur in Camelot (1967), as Oliver Cromwell in Cromwell (1970) and for his portrayal of Albus Dumbledore in Harry Potter and the Philosopher's Stone (2001) and Harry Potter and the Chamber of Secrets (2002), his last film. He also played a British aristocrat and prisoner in A Man Called Horse (1970), a gunfighter in the Clint Eastwood directed western Unforgiven (1992), and emperor Marcus Aurelius in Gladiator (2000).

He also played the role in the first two films.

Retrieved from "https://hpseries.fandom.com/wiki/Richard_Harris?oldid=4126"
Community content is available under CC-BY-SA unless otherwise noted.