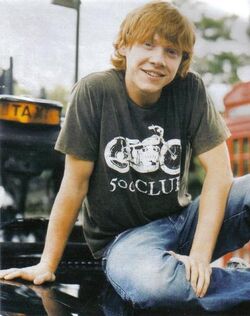 Rupert Alexander Lloyd Grint (born 24 August 1988) is an English actor best known for playing Ron Weasley in the Harry Potter films. In December 2007, Grint was ranked #16 in the list of Forbes Top twenty earners under 25 with an annual earning of $4 million (US).

Grint was born in Hertfordshire. His mother, Joanne Grint (née Parsons), is a housewife, and his father, Nigel Grint, is a memorabilia dealer. His brother, Anthony DiFiore, is an actor, dealer and former racing car driver. He has one brother, James (born in 1990), and three sisters: Georgina (born in 1993), Samantha (born in 1996) and Charlotte (born in 1998). Before being cast in Harry Potter, he had only appeared in plays for school and his local theatre group, Top Hat Stage School. As a young child, he was once cast as a fish in a play based on the story of Noah's Ark. He also played Rumpelstiltskin in another school play.[3]

Grint also starred in the coming-of-age story Driving Lessons with Laura Linney and Julie Walters (who acted as his character's mother, Mrs. Weasley, in the Harry Potter movies), which was released in the summer of 2006. Grint got excellent reviews for his first leading role: the critics praised the realism he brought into the role of a shy teenager Ben Marshall, as well as his "riotous comedic timing" and "fantastic screen chemistry" with Walters. Also known for his radio and television voice-over work, he appeared as Nigel Molesworth in the Baggy Trousers series for BBC Radio 4 and voiced Peter Pan in a BBC documentary. On 9 July 2007, Grint and fellow cast-mates Daniel Radcliffe and Emma Watson left imprints of their hands, feet and wands in front of Grauman's Chinese Theater in Hollywood. On 2 July 2008, it was announced that Rupert would star in Cherrybomb, "a gritty thriller about two teenagers who get into trouble when they both fall for a beautiful new girl in town." It was announced that Grint would shoot a nude scene in this movie. Filming was wrapped up in late August 2008; on 5 December 2008, it was announced that the post-production was completed.

In August 2008, it was announced that Grint is to star in comedy remake of 1993 French film Cible Emouvante, entitled Wild Target, alongside Bill Nighy and Emily Blunt. Grint's character is called Tony. The filming for Wild Target wrapped up on 27 September 2008 and the movie is currently in post-production. While directing Prisoner of Azkaban, Alfonso Cuarón is reported to have gained the strong impression that Grint is "the likely future star out of the Hogwarts trio". He voiced his character Ron Weasley in the Video game of Harry Potter and the Order of the Phoenix, and will voice him again in the video game of Harry Potter and the Half-Blood Prince.

In July 2004, Grint finished Richard Hale School, taking his GCSE examinations. When not working, he enjoys learning to ride the unicycle, drawing/sketching, watching Tottenham Hotspur and playing golf. Like the character he portrays, Ron Weasley, he has stated that he has arachnophobia. With his earnings from the "Harry Potter" series, Grint purchased an ice-cream van and then stated jokingly that if his career falls out after the end of the seven part series, then he'll still have the van. According to his co-star Emma Watson from her interview with Conan O'Brien, the van has all the toppings and such in it.

In September 2007 Rupert and his co-stars along with David Heyman and David Yates attended the National Movie Awards. He lost to his co-star Daniel Radcliffe for Best Actor. Hair care company Brylcreem released a list of the best and worst male hairstyles of the celebrity world in 2007 putting Rupert Grint's haircut with the top five best male film stars haircuts and his co-star, Daniel Radcliffe, in the Top 5 Worst Male Film Star haircuts.

Retrieved from "https://hpseries.fandom.com/wiki/Rupert_Grint?oldid=4119"
Community content is available under CC-BY-SA unless otherwise noted.