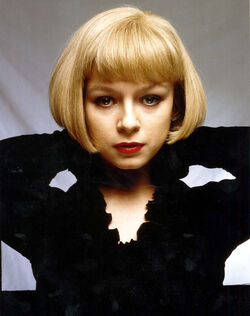 Samantha Morton (born 13 May 1977) is a Golden Globe Award-winning and two-time Academy Award-nominated English actress and film director. She is also a campaigner for Social justice and she is an ambassador for the Save the Children organisation. Because of both her acting excellence and her commitment to political activism, a The Sunday Times journalist described her as "a Working class Vanessa Redgrave".

Samantha Morton played The Maid in Harry Potter and the Goblet of Fire episode one; The Riddle House. She appears in the opening scene with the death of the Riddle family and and in the discussion about Frank Bryce in the pub, The Hanged Man.

She does not appear in the film version.

Retrieved from "https://hpseries.fandom.com/wiki/Samantha_Morton?oldid=4262"
Community content is available under CC-BY-SA unless otherwise noted.